Reader. Writer. Geek. An advertising creative by profession, I began my career as a copywriter and eventually found my way to the digital marketing world. Today, I serve as Brand Lead at Google India. Here, I work closely with our agencies to lead our marketing creative work - essentially everything you've seen from Google since 2014. And look after Doodles for India and other special Brand projects. Being married to Saanwari, founder of PoppadumArt, one of India's top indie decor brands, makes me the CxO of her business, where the value of x changes daily. In this role, I sell behind the counter at exhibitions, lug around cartons, and look after all PoppadumArt marketing. In my spare time, you'll find me glued to my Kindle, probably reading sci-fi, fantasy, histories, biographies and business books. I'm a huge fan of Robert Jordan's Wheel Of Time, as also Asimov, Clarke, Superman and Star Wars. My other obsession includes collecting fountain pens to leave behind to any heirs I may have. 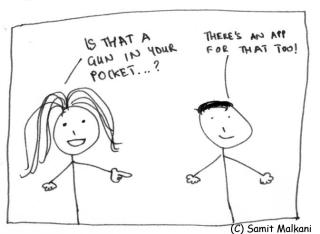 It seems that, almost a year after my last post on the subject, people are finally beginning to believe in the power of the mobile phone.
Of course, a lot has changed in the past year. Google’s Android OS has blazed a new trail, opening up the market for a generation of affordable smartphones with multiple hardware manufacturers. BlackBerry has sold handsets purely because of BBM. iOS has evolved and grown in India, bucking the global trend. As a result, normal folk – the late adopters – are Facebooking, Tweeting, Whatsapping, Instagramming and what not, all on the go.
As a result, clients, digital agencies, publishers and media agencies, all want to build mobile apps. These days, I get at least a couple of requests a month on mobile apps (and pitch at least half-a-dozen more).
The intention is good, but there are several reasons why many mobile apps from India have failed to get traction.
One: The interfaces aren’t up to international standards. They lack the polish and smoothness of their international counterparts.
Two: A lot of apps depend on content. And fail when they don’t have that content.
Three: They’re not promoted well enough.
Four: They’re tactical, almost campaign-based, rather than strategic and long-term.
Five: They don’t offer the user enough beyond the initial experience or utility. The makers of the app don’t look for deep user/consumer insights.
That’s why it was a relief (and a delight) to experience Standard Chartered Bank’s mobile banking application – called Breeze – last weekend.
Breeze is – for real – like carrying your bank around in your pocket. It lets you do everything you could from your Netbanking, and then some. Check your account and your transactions; transfer money; pay bills; book cinema tickets; book flight tickets; yeah, you read that right!
In keeping with today’s audience, Breeze uses extremely simplified language. “Bank Balance” is replaced by “What You Have”; “Credit Card Outstanding” by “What You Owe”. So simple.
It’s also integrated with Twitter. And locates ATMs using Google Maps. But what really sells it for me is its unique Wishlist app. Here, you can allocate an amount of money every month towards a goal – be it a trip abroad or an iPad 2.
I could go on, but I’d like to conclude by judging Breeze by the parameters I outlined earlier.
One: The interface is gorgeous and simplistic. The app has been built by teams working around the globe, and the experience in mobile interface design shows.
Two: With travel and cinema bookings comes great additional content.
Three: The promotion is excellent. I saw the app at a blogger meet organised by BlogAdda (more on that in a later post). This is the third meet StanChart have organised in the APAC region, and judging by the bloggers’ response, it was pretty successful. And I’m sure it’s just one part of the marketing communication mix.
Four: It’s a strategic tool, a long-term initiative. A tool that might tempt some digital-savvy consumers to shift accounts. A tool that’s definitely worth some advertising dollars too.
Five: By going with additional functionality like bookings and Wishlist, the Breeze team has shown great understanding of the modern, young consumer. And from what I gather, there are more features to come. What’s more, Breeze works on over 500 devices across multiple platforms.
I’m not going to be downloading Breeze – but that’s only because I don’t have a StanChart account. But this is a fine example of how Indian brands can build mobile apps.
To download Breeze, just visit the Breeze website.
Disclaimer: I reviewed Breeze at a BlogAdda blogger event sponsored by Standard Chartered Bank. Neither BlogAdda nor Standard Chartered Bank paid me for this review.

3 thoughts on “The Power In Your Pocket”